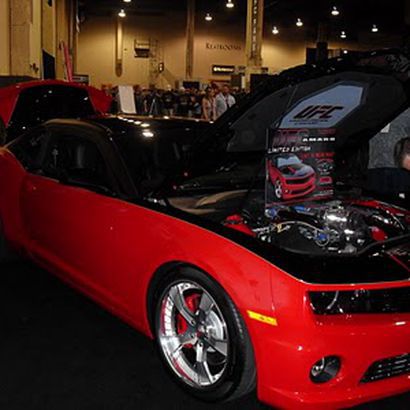 LAS VEGAS, Sept. 25 — One of the hottest cars ever made, the custom UFC Camaro, just sold for $350,000 at the Barrett-Jackson Collector Car Event in Las Vegas, Nev., with all funds benefitting the Intrepid Fallen Heroes Fund.

UFC President Dana White, who is in Indianapolis this weekend for the UFC 119: Mir vs Cro Cop Pay-Per-View event, tweeted, “Thank you to all the bidders on the UFC Camaro!! It went for $350k!!! That money goes to the troops. So amazing!!! I LOVE UFC fans.”

The UFC Camaro crossed the Barrett-Jackson block during prime time at the Mandalay Bay Convention Center today, and was driven by none other than UFC Hall of Famer Chuck “The Iceman” Liddell.

The family of the winning bid, who ultimately paid $350,000 for the custom sports car, admitted to auction officials that they are huge UFC fans, and are thrilled with their collectible UFC Camaro.

The $350,000 for the UFC Camaro will benefit the Intrepid Fallen Heroes Fund, a not-for-profit organization dedicated to providing support for the families of United States military personnel injured or lost in performance of their duty. Likewise, the Intrepid Fallen Heroes Fund works to assist our wounded warriors by providing facilities and services that ensure that injured military personnel receive the best possible treatment our nation has to offer.

These privately-funded facilities include the Center for the Intrepid, a state-of-the-art physical rehabilitation facility at the Brooke Army Medical Center in San Antonio, Texas that provides those with severe extremity injuries, severe burns and amputees the best opportunity to regain their ability to live and work productively; and the National Intrepid Center of Excellence (NICoE) in Bethesda, Maryland, a $65 million, 72,000 sq. ft., advanced center dedicated to the diagnosis and clinical care of service members suffering from traumatic brain injury (TBI), post traumatic stress (PTS) and other complex psychological health issues.

Ultimate Fighting Championship®, Ultimate Fighting®, UFC®, The Ultimate Fighter®, Submission®, As Real As It Gets®, Zuffa®, The Octagon™ and the eight-sided competition mat and cage design are registered trademarks, registered service marks, trademarks, trade dress and/or service marks owned exclusively by Zuffa, LLC and licensed to its affiliated entities and other licensees in the United States and other jurisdictions. All other marks referenced herein may be the property of Zuffa, LLC, its affiliates or other respective owners.