The Story of a NICoE Hero 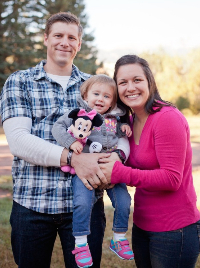 I’ve always wanted to be a soldier. In 2006, that dream came true when I enlisted in the U.S. Army as an Airborne Infantryman. I served in numerous assignments including combat operations in Iraq and Afghanistan.

In 2008, I experienced several IED blasts while in combat. I was told that my injuries caused a tumor in my brain and I was given 6 months to live. After receiving a second opinion, I went through treatment and in 2010, I was back in Afghanistan on deployment.

On January 19, while on a combat patrol, a suicide bomber detonated eight feet away from me, throwing me more than 15 feet. Immediately following the attack, I was able to react, going back in to pull out my platoon member. However, I later found that I had received shrapnel to my entire left side and face, fracturing three disks in my back and causing hearing loss in my right ear and partially in my left ear.

After 6 months of treatment at Fort Bragg, I was fortunate to be sent to the National Intrepid Center of Excellence where I was diagnosed with traumatic brain injury and post-traumatic stress. During my 4 weeks of intensive treatments, it was the first time I ever felt like a patient as opposed to a number. The impact of my stay at NICoE was immeasurable. I walked in with two vague diagnoses and no plan. When I left, I had 27 diagnoses and a thorough action plan that included timelines for progress and plenty of light at the end of the tunnel.

My wife, Sarah, was able to attend all of the appointments so that she could hear firsthand what was going on with me and how she could help as a caretaker. The care that I received and, most especially my service dog, Nemo, who is part of our family, is allowing me to live my life. While I had to be medically retired, I am proud that I am now able to help the Intrepid Fallen Heroes Fund.

We need more of these centers for all the troops coming back with TBI.

If you would like to ensure that more of our nation’s heroes have the resources and centers they need, please donate to Intrepid Fallen Heroes Fund today.