The Clay Hunt SAV Act: A Crucial Step In The Right Direction 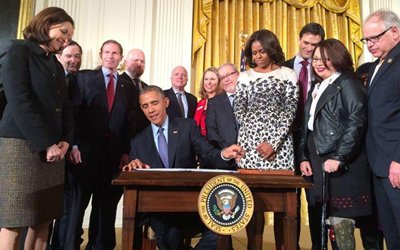 Earlier this year, President Obama signed the Clay Hunt Suicide Prevention for American Veterans Act into law. The law, designed to provide national mental health support for military veterans by providing a way for the VA to strategize suicide prevention and give student loan incentives to recruit psychiatric specialists, is a great step in the right direction. Thanks to this law, better resources, support and benefits will be provided to brave veterans struggling to overcome mental health challenges.

“Too many of our troops and veterans are still struggling,” said President Obama before signing the bill at a ceremony in Washington, D.C. “They’re recovering from injuries. They’re mourning fallen comrades. They’re trying to reconnect with family and friends who can never fully understand what they went through in war theater. For many of them, the war goes on – in the flashbacks that come rushing forward, in the nightmares that don’t go away.”

Every day, 22 military veterans commit suicide (over 8,000/year). More veterans commit suicide annually than died in Iraq and Afghanistan, and, according to a recent study by the Annals of Epidemiology, the rate of suicide among veterans is approximately 50 percent higher than the rate among the general public. The law’s namesake, Clay Hunt, was a 28-year-old Marine from Houston who took his own life after serving multiple tours in Iraq and Afghanistan, developing PTS and failing to get the services he needed from the Veterans Administration. Some studies show that up to 50% of service members who fought suffer from the invisible wounds of PTS, TBI or other mental illness. This legislation is an important step toward providing better access to mental health resources for our veterans.

Developed by Iraq and Afghanistan Veterans of America, the act will:

IFHF is incredibly happy to see such big advancements in mental health care taken my our lawmakers. We hope that this helps further the awareness and responsibility of all who are affected by mental health issues, both directly and indirectly.

The Intrepid Fallen Heroes Fund is helping serve our nation’s heroes and their families by helping fund all 9 Intrepid Spirit centers. It is our goal to give back to the ones who have served our country and we can do that with your donations. We ask you to help make our goal a reality through your donation.