Algonquin Advisors along with Blue Orchid Capital sponsored a one day golf event “Supporting our Troops” at the Robert Trent Jones Golf Club in Gainesville, Virginia this past October 2010.  Corporate and individual sponsorships were sold to help raise funds and awareness for the on-going programs provided by the Intrepid Fallen Heroes Fund and the Troops First Foundation.

Through the generosity of the sponsors a contribution of over $140,000 was made to The Intrepid Fallen Heroes Fund and the Troops First Foundation. Both of these organizations devote an enormous amount of money, time and resources to assisting our fellow Americans and their families who have served our country and insured freedoms for us and for others around the globe. Featured guest included Corey Pavin, 1995 U.S. Open Champion and 2010 Ryder Cup Captain, David Feherty, CBS Golf Analyst and several Honorary Military and Wounded Warriors. 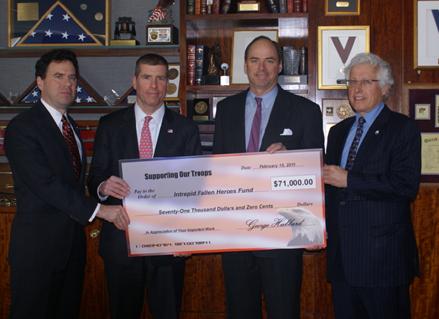