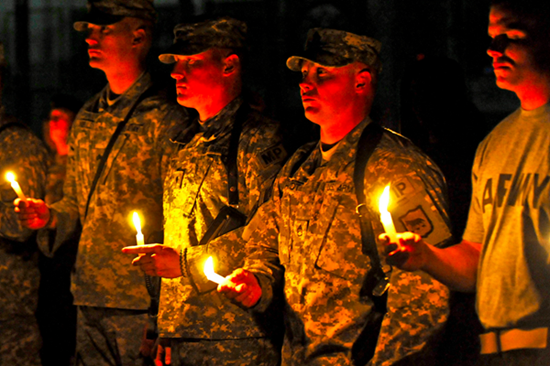 The month of September is known for many things: The closing of summer, the kickoff of football season, kids going back to school, but September is also known for another reason for many: the month when we are dedicated to preventing suicides.

As of 2021, more than 48,500 people in the US die by suicide each year (up from 44,000 in 2014), making suicide the 10th leading cause of death for Americans just behind influenza and pneumonia. This meant someone died by suicide every 11 minutes (up from one ever 13.3 in 2014). While these statistics are staggering, there are signs that someone might show that can be seen as risk factors.

Stressful life events, in particular, combat, can be a major contributor on the path to suicide. As such, an astounding number of service members come back from combat with injuries that are physical or mental. This also goes for service members who were in a stressful event outside of combat.

It’s common for some service members to turn to alcohol, drugs, anger, aggression, and reclusion as a crutch. Something to make them forget, and lessens the burdens felt every day. However, these types of coping mechanisms can be harmful to the individual and commonly lead to further depression. The worsening of these symptoms is what can lead to terrible consequences. The Intrepid Fallen Heroes Fund’s current initiative is ultimately to provide a place to properly address these symptoms. Together, these conditions can be treated with support for Traumatic Brain Injuries and Post Traumatic Stress.

Our current mission is to raise money to build 9 state-of-the-art treatment centers for service members, specifically to treat TBI and PTS injuries. As a proven leader in supporting the men and women of our Armed Forces and their families, we will not stop until all of our centers are fully funded. The Invisible Wounds are there, and IFHF can help our heroes recover.

Your donations support the men and women of our Armed Forces and their families. A donation to the Intrepid Fallen Heroes Fund, no matter the size, goes directly towards building the centers. Each of these centers are named Intrepid Spirit and are satellite centers of the National Intrepid Center of Excellence (NICoE). Furthermore, these centers are at the forefront of medical advancements and research to help treat these specific types of invisible wounds. Let’s honor our service members together and never forget their heroic efforts.