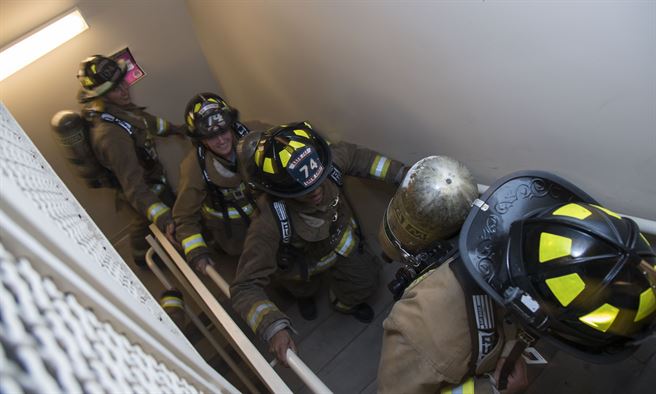 The terrifying images of September 11, 2001 are forever engrained in the minds of Americans. On that day, 2,753 people lost their lives at the site of the World Trade Center in Lower Manhattan. Of those who perished, 343 were New York City firefighters, 23 were New York City police officers and 37 were officers at the Port Authority of New York & New Jersey. In the years that followed, many different memorials and events were created to make sure that we never forget the sacrifice of the men and women who ran toward the towers and destruction and saved countless lives before they lost their own.

One of those memorials is the 9/11 Stair Climb. Originating in Denver, CO, the first climb was held September 11, 2005 when five Colorado firefighters came together at a downtown Denver high-rise to honor the memory of the New York City firefighters lost on 9/11. The five fighters climbed 110 flights of stairs that day – the same number as the firefighters who went up into the World Trade Center. In 2006, 12 firefighters from four different fire departments in the metro Denver area participated. As the event grew each year, more and more fire fighters got involved until attendance was capped at 343 participants in 2008.

In 2010, the original group of firefighters partnered with the National Fallen Firefighters Foundation to develop a template for the 9/11 Memorial Stair Climb that could be duplicated across the country. The National Fallen Firefighters Foundation is an organization created in 1992 by Congress to lead efforts to remember America’s fallen firefighters. In 2017, there will be more than 40 9/11 Stair Climbs from coast to coast. These events, like the ones in Hot Springs, AR and New Orleans, LA, serve as tributes to the brave men and women and act as symbolic representations of their heroic journey that day.

Military bases across the globe also participate in 9/11 Stair Climbs, many times with participants dressed in full firefighter gear. In 2016, more than 115 Airmen at Duke Field, FL walked the stairs of the base’s billeting facility with a flag for 24 hours straight before delivering the flag to firefighters and security forces color guard the next morning for a 9/11 remembrance ceremony. Members of the 8th Fighter Wing at the Kunsan Air Base, Republic of Korea and fire fighters and security forces at Joint Base Andrews also participated in 9/11 Stair Climbs in 2016.

So, how can you get involved? Find a 9/11 Stair Climb near you and participate. Be sure to prepare your body in advance of the event. Watch this video for some training suggestions that will get you ready for the event, and help you recover faster in the days following. If there isn’t an event near you, learn how you can coordinate a 9/11 Stair Climb in your city in the future. You can find more resources on the National Fallen Firefighters website.

Fallen heroes are central to the mission of the Intrepid Fallen Heroes Fund. Visit our website to learn more about how IFHF is supporting our fallen military heroes suffering from traumatic brain injury and psychological health conditions.