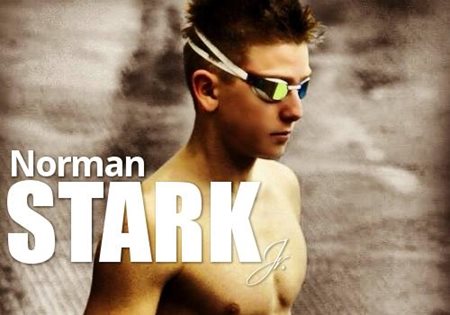 It is a beautiful thing when a young community member is so moved by a cause that he commits time and energy to it. The Intrepid Fallen Heroes Fund is honored to have such a person in Norman Stark, Jr., who is swimming across Lake Erie in an effort to raise support for IFHF.

For Norman, a varsity member of his high school swim team, swimming is almost second nature. An undertaking of this multitude, however, is something else entirely. The swim that Norman will complete, from Long Point, Ontario to Freeport Beach in North East Township, Pennsylvania, is 24.3 miles. Although many seasoned swimmers have attempted this same swim, only a select few have successfully completed it. However, Norman has a secret weapon. His coach and mentor for the swim is Josh Heynes, who has completed this same swim twice before.

Norman was inspired to attempt the marathon swim after witnessing the challenges that our nation’s veterans and service members experience everyday. He has a first hand account of what military families go through, as 3 of his older siblings are in the US Navy. In addition to his own personal connections to the Navy, Norman has said that he, “also wants to honor the deaths of David Hallman III as well as USNA Midshipmen Max Allen, Will McKamey, and Hans Loewen who all tragically died this past year.”

Norman’s donation goal to IFHF is $15,000. As of today, he has reached 75% of that goal, but still hopes to exceed it in advance of his swim this weekend. By pledging all proceeds raised for his swim to IFHF, Norman will not only honor those close to him, but will also be providing care for service members suffering from Traumatic Brain Injury and Post Traumatic Stress.

We encourage you to not only follow Norman on his site and on Twitter, but to consider supporting him in his efforts to raise money for IFHF. Norman hopes to swim this weekend, August 2nd, and invites you to follow him through his Live Swim feed. IFHF will also be giving updates on Norman’s swim on Twitter.