NEW $65 MILLION FACILITY FOR RESEARCH OF BRAIN-INJURY IN MEMBERS OF ARMED FORCES TO BE OFFICIALLY DEDICATED AT NATIONAL NAVAL MEDICAL CENTER IN BETHESDA, MD
***
NICoE, the National Intrepid Center of Excellence, Built Entirely with Private Donations to be Given to the Military 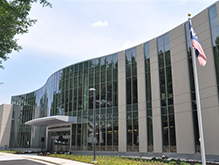 “We are tremendously excited to open the doors to this incredible facility that will help to treat our men and women in uniform who have suffered these invisible injuries of the brain and memory,” said Arnold Fisher, Honorary Chairman of the Intrepid Fallen Heroes Fund. “Traumatic Brain Injury and Psychological Health Conditions – largely caused by IED explosions in Iraq and Afghanistan – are the signature wounds of our current overseas conflicts in the war on terror. As Americans, it is not charity, but rather it is our duty to care for these men and women who have fought and sacrificed for our freedom.”

“We’re excited about the dedication ceremony and about the opportunity to occupy and use this building to provide diagnosis, clinical care and research on behalf of our service members and their families,” said Dr. James Kelly, Director of the NICoE.

The NICoE was funded by the generosity of the American people through a fundraising effort mounted by the Intrepid Fallen Heroes Fund, which provides assistance to our nation’s military heroes who have been critically injured in the performance of their duty, and their families. The IFHF previously raised close to $75 million to support families of military personnel lost in Operations in Iraq and Afghanistan and to construct the Center for the Intrepid, an advanced physical rehabilitation facility at Brooke Army Medical Center in San Antonio, Texas, which opened in 2007.

Spearheading the NICoE project is New York real estate executive Arnold Fisher, the honorary chairman of the IFHF whose family was responsible for turning the retired aircraft carrier USS Intrepid into a museum to honor and educate about our nation’s veterans. According to Fisher, this is a much tougher project to accomplish because mental and brain injuries are not visible to the untrained eye. Soldiers can be living with problems that no one can see. In addition, problems such as post traumatic stress disorder can surface years later if left untreated.

The architect for the project is SmithGroup, who was also responsible for designing the Center for the Intrepid, an advanced rehabilitation center for amputee and burn victims developed by the Intrepid Fallen Heroes Fund in San Antonio, Texas.

“This facility accommodates TBI treatment and research programs that are available nowhere else in the world,” said Phil Tobey, Senior Vice President of SmithGroup. “Every element of the building’s design is acutely attuned to the multiple physical, sensory and wayfinding needs of TBI patients.”

The NICoE will feature the most advanced equipment and facilities for diagnosis and treatment. Improvements in screening, diagnosis, and treatment will be fed back out to the military and VA hospitals and medical facilities across the country. Long-term follow-up care will also be incorporated into the system plan to ensure that, once soldiers separate from the military, they do not separate from whatever continued treatment they need.

Many thousands of military personnel may suffer from some level of TBI as a result of service in Iraq or Afghanistan. The NICoE will be designed to provide the most advanced services for diagnostics, initial treatment plan and family education, introduction to therapeutic modalities, referral and reintegration support for service members with TBI, post traumatic stress disorder, and/or complex psychological health issues. Further, the NICoE will conduct research, test new protocols and provide comprehensive training and education to patients, providers and families while maintaining ongoing telehealth follow-up care across the country and throughout the world. Upon completion, the Intrepid Fallen Heroes Fund will transfer the NICoE to the Department of Defense for staffing and ongoing operation.