The anniversary of September 11, 2001 holds a solemn yet indisputably patriotic place in all American hearts. On the 10-year anniversary in 2011, a then-14-year-old Michael Schumer saw it as a call-to-action. “I wanted to do something patriotic and give back to the country” he says, remembering his reaction to that day. Reflecting upon the events that unfolded in 2001 sparked something inside of him. But what to do? He thought back to his formative years. His grandmother had taken him to visit the Intrepid Sea, Air & Space Museum in New York City when he was just 5 or 6 years old. He’d fallen in love with Intrepid, the mission of the museum, and the foundation on which they were built.

Like a switch flipping in his mind, Michael went to work. He started by launching a tennis tournament called Points for Patriots to benefit the mission of Intrepid’s sister organization, the Intrepid Fallen Heroes Fund: building Intrepid Spirit Centers to treat the invisible wounds of war: traumatic brain injury and post-traumatic stress. Over the span of 3 years, his tournaments raised nearly $40,000 for IFHF. And he was just getting started. Michael and Points for Patriots have raised $100,000 to-date. 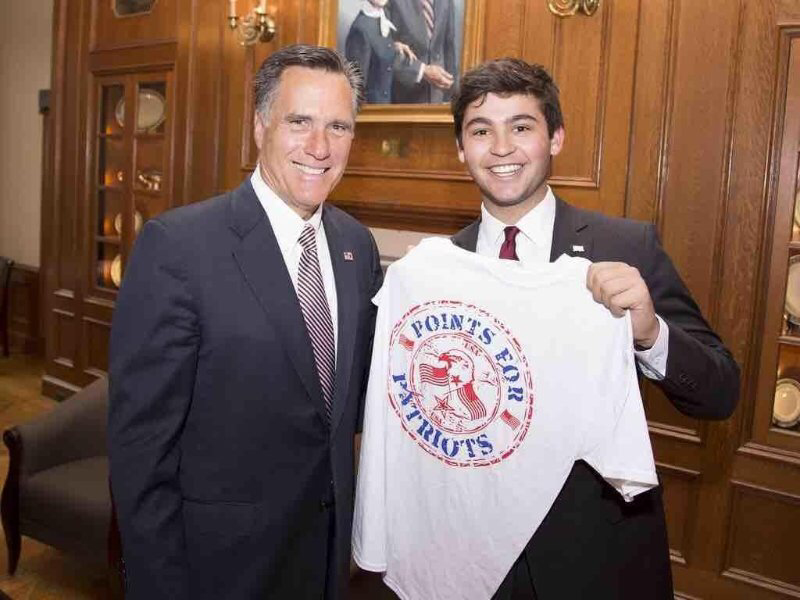 In the fall of 2014, Michael set off to start college at the University of Chicago. Most incoming college freshman are excited about venturing away from home, new friends, new places, and socializing. Michael on the other hand was focused. On the heels of successful fundraisers with Points for Patriots, he saw his new environment as a chance to expand the momentum he had built for the cause to a wider audience. “A fortuitous opportunity” he describes it.

At the University of Chicago, Michael launched the Maroon Veterans Alliance (MVA) on Veterans Day in 2014. Its mission is to support the veteran community in Chicago through fundraisers and workshops. The workshops, dubbed Veterans Career Advocacy Program (VCAP), were designed to arm veterans with skill sets, support, and networks to equip them for success in the current job market. VCAP events connected veterans with students, faculty, and industry leaders in the University of Chicago community, to educate them on topics including entrepreneurship, financial literacy, and public service. Participants in VCAP events included former CIA director Mike Morrell, Senators Tom Harkin and Kelly Ayotte, and Todd Connor, a U.S. Navy veteran and CEO of Bunker Labs, a non-profit organization in Chicago dedicated to helping new veteran entrepreneurs start their own businesses. In addition, Michael and MVA continued to run Points for Patriots fundraisers out of Chicago. Retreats were held in tennis, basketball, and dodgeball, providing the opportunity to educate hundreds of kids in the Chicago area about Intrepid and the mission of the Intrepid Fallen Heroes Fund. 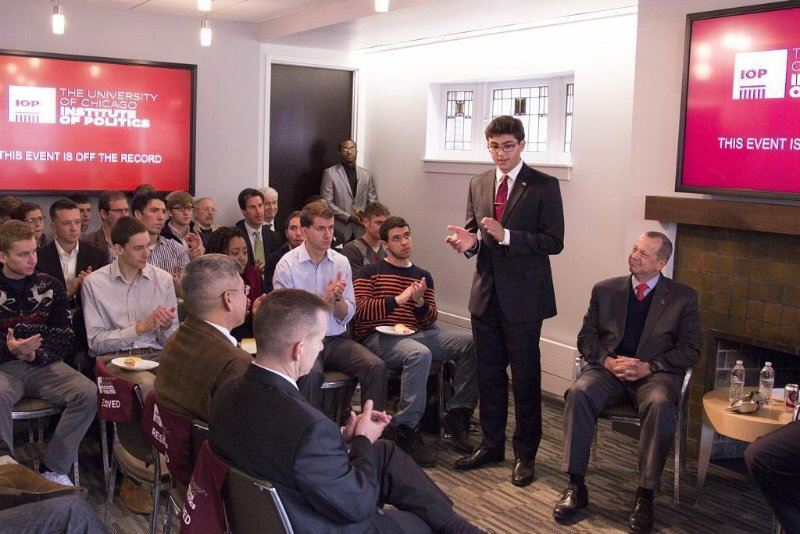 In college, Michael set his sights on the White House and began an internship with First Lady Michelle Obama, working on her veterans initiative. While at the White House, he learned the in’s and out’s of how the United States assists veterans, from an intergovernmental perspective. He participated in and observed events where the President, First Lady, and other White House staffers interacted with veterans and their families. Most notably, he was present on the South Lawn during the commemoration ceremony for the 14th anniversary of September 11.

After his time at the White House, it was back to the University of Chicago and MVA. Michael continued his work with Points for Patriots until his graduation in June 2018. He’s since begun his post-college career at Bunker Labs as a Legislative Liaison, where he works to discuss veteran entrepreneurship through roundtables created with city, state, and federal legislators. He’s also working to help advocate against budget cuts for veterans both on the city and state levels in New York as a Fellow at the NYC Veterans Alliance.

With all the work Michael has done for IFHF over the years, we invited him to attend the ribbon cutting ceremony for our Intrepid Spirit Center at Camp Pendleton. There he was able to see first-hand what all the work he’s done advocating for the Intrepid Fallen Heroes Fund goes towards: creating state-of-the-art spaces to heal our heroes. We salute Michael for all the work he’s done and continues to do in the name of the heroes who protect and serve our country. Heroes like Michael don’t come along every day, but when they do, their work and service is transformative. 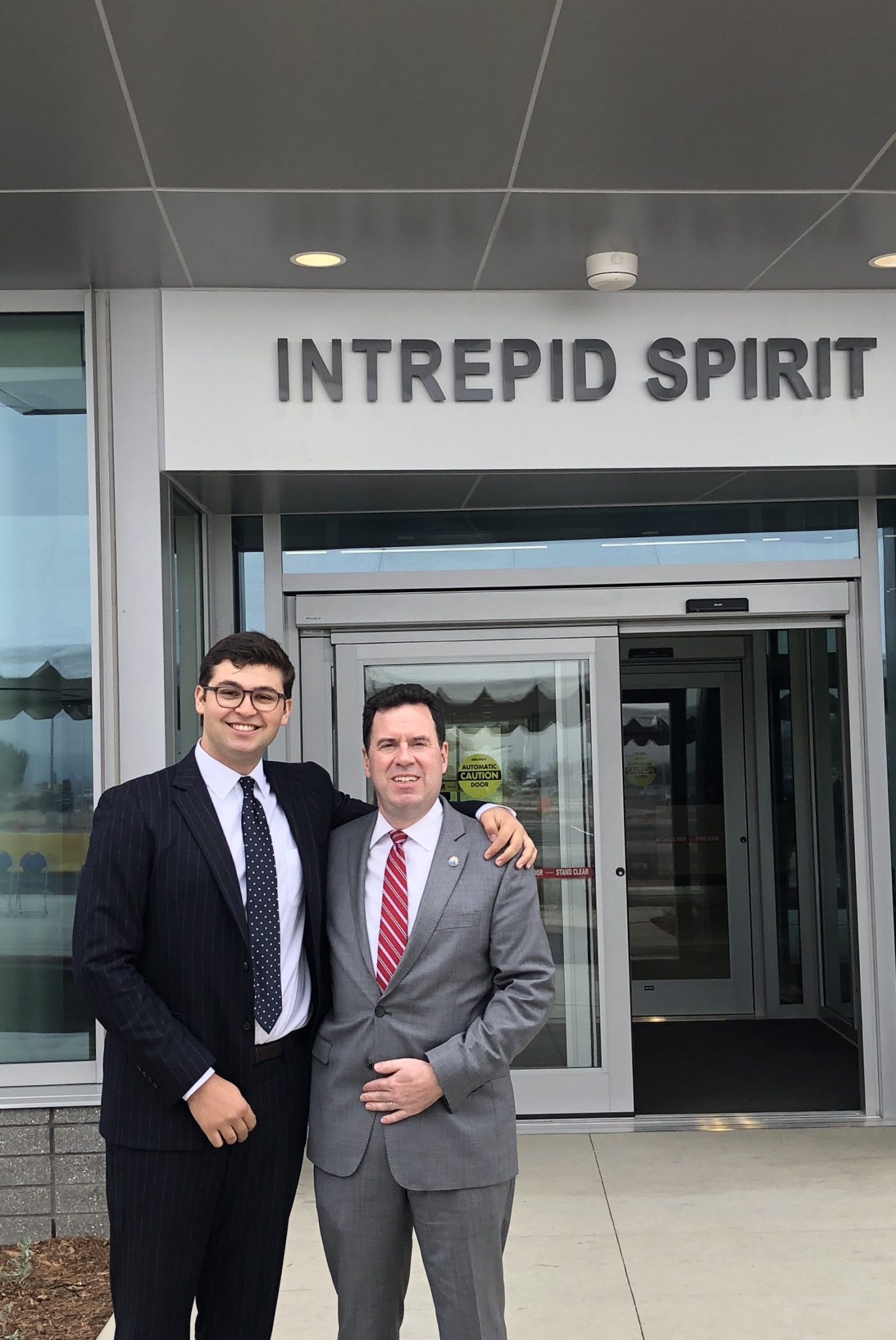