This year, we are once again excited to have a team supporting the Intrepid Fallen Heroes Fund in the Race Across America! Starting on June 20th in Oceanside, California and ending twelve days later in Annapolis, Maryland, Team Intrepid Fallen Heroes will be hitting the pavement once more to go on the 3,000 mile journey across the United States to bring awareness to and support service members who suffer from traumatic brain injury and psychological health conditions.

Last year, Team Intrepid Fallen Heroes won first place in the 8-person team division. The team passed their fundraising goal and was able to raise $650,000 for IFHF! This year, we hope to support the team in surpassing that! 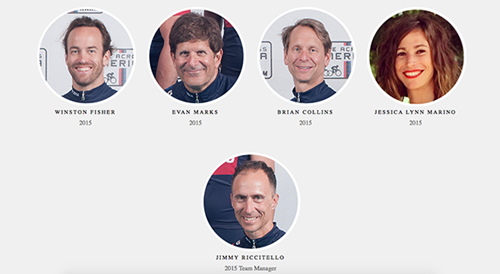 Team Intrepid Fallen Heroes 2015 consists of Winston Fisher, Evan Marks, Brian Collins, Jessica Lynn Marino, and their team manager, Jimmy Riccitello. If you recognize Winston Fisher’s name in regards to RAAM, that’s because this is his second year competing with Team Intrepid Fallen Heroes! From the Tough Mudder to Ironman, he loves the thrill of racing and has been competing in various races since 2012. Fisher is also the Executive Vice Chairman of the Fisher House Foundation and serves on the Board of the Intrepid Sea, Air & Space Museum.

Evan Marks has a personal connection to the military since his father served in the Army during the Korean conflict. He is also quite the racer with over 25 triathalons under his belt in the last 15 years. “I am proud to make this small personal sacrifice on behalf of the disabled members of our military community by dedicating my RAAM ride to Intrepid Fallen Heroes,” says Marks. Brian Collins has always been a recreational biker, but he started getting more serious about biking 2 years ago. He also enjoys playing basketball and soccer. Having so many open roads in Connecticut sure has helped him with his training for RAAM!

Jessica Lynn Marino is incredibly passionate about training and racing. She is a former college soccer player, turned marathon runner, turned endurance athlete. “While triathlon has become my passion, RAAM is an altogether new and exciting challenge that I have dreamed of racing in for some time now. I relish the opportunity to join my teammates in riding for a cause much larger than our own personal accomplishments,” says Marino.

After 20 years traveling the world as a professional triathlon athlete, Team Intrepid Fallen Heroes’ team manager, Jimmy Riccitello, turned his energy and experience towards helping others achieve balance, perspective, and success in sports by establishing Riccitello Coaching. When asked about training the team for this year’s RAAM, Riccitello said, “My father was a pilot in the United States Air Force and I have many friends who have suffered injuries while serving our country. I welcome the opportunity to raise money and awareness for a cause as noble as the Intrepid Fallen Heroes Fund.”

We’re excited to see how Team Intrepid Fallen Heroes does this year! Even though the team is half the size, they still have so much heart and passion for racing and, more importantly, for supporting and bringing awareness to what our service members go through when they come home.