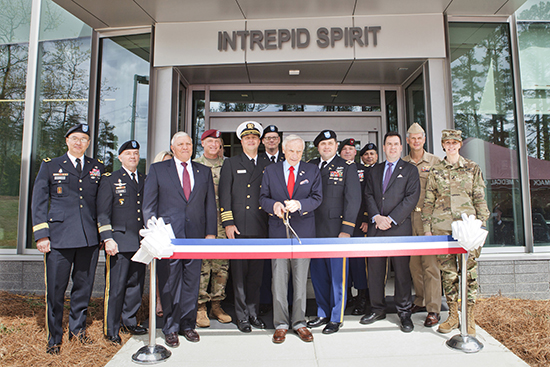 Representatives from the Intrepid Fallen Heroes Fund (IFHF), Fort Bragg, and the Womack Army Medical Center today opened a new Intrepid Spirit center that will diagnose and treat TBI and psychological health conditions in U.S. service members at Fort Bragg, NC. The facility is the fifth in a series of nine centers located at military bases around the country built by the IFHF, a not-for-profit organization and national leader supporting the men and women of the United States Armed Forces and their families. Intrepid Spirit centers are operational at Fort Belvoir, Virginia, Camp Lejeune, North Carolina, Fort Campbell, Kentucky, and Fort Hood, TX.

Fort Bragg’s new Intrepid Spirit center cost approximately $11 million to construct and equip with the latest in brain technology and treatment facilities and spans 25,000 square feet. Funding for the project was raised privately through the IFHF.

“Thousands of our brave men and women in uniform return from duty in the conflict zones around the world suffering from TBI and psychological health conditions‎. While the numbers of military personnel overseas has decreased, the continuation of regional conflicts and global terrorism means that our military must be ready for active deployment in conflicts that will continue to cause this unseen injury. Our troops volunteer; we do not draft. It is therefore our sacred duty to support them,” said Arnold Fisher, Honorary Chairman of the Intrepid Fallen Heroes Fund. “The Intrepid Fallen Heroes Fund is leading this effort, and I implore all Americans to join this critical mission. Every cent donated from the public to the Intrepid Fallen Heroes Fund goes directly towards building Intrepid Spirit centers.”

“Having an Intrepid Spirit Center on Fort Bragg is a valuable asset,” said Col. Lance Raney, commander, Womack Army Medical Center. “We care for the Soldiers, Airmen and special operators who are at the leading edge of our Nation’s defense every day. These service members deserve the best possible care. The NICoE professionals and this new facility will help us continue to provide service members with the quality care their selfless commitment and heroic service to our Nation deserves.”

The design and mission of the Intrepid Spirit centers are based on the original National Intrepid Center of Excellence (NICoE) which opened in 2010 at the Walter Reed National Military Medical Center in Bethesda, MD. Operated by the Department of Defense, NICoE is the most advanced facility of its kind in the country, and is the center of the Armed Forces’ efforts in researching, diagnosing and treating TBI, psychological health conditions and related injuries sustained by military personnel.