Fort Belvoir, VA (September 11, 2013) – Since September 11, 2001, more than 2.5 million U.S. troops have been deployed to Iraq and Afghanistan, and hundreds of thousands of service members have been diagnosed with traumatic brain injuries, due to IEDs, combat related incidents and training activities. Today, those service members, and thousands of others who have yet to receive a diagnosis have new hope, as the Intrepid Fallen Heroes Fund (IFHF) joined with military leaders to officially dedicate the new $11 million “Intrepid Spirit” NICoE (National Intrepid Center of Excellence) Satellite Center set to provide crucial treatment of Traumatic Brain Injury (TBI) and Post Traumatic Stress (PTS) in returning service members at Ft. Belvoir, VA.

“Our military heroes answered the call to serve our nation in a time of need, now the rest of America must answer the call to serve them just the same,” said Arnold Fisher, Honorary Chairman of the Intrepid Fallen Heroes Fund. “Over the past twelve years, too many service members have returned from Iraq and Afghanistan with PTS and TBI to find that the care they needed was not available or accessible. Their injuries can lead to depression, unemployment, and even suicide – all conditions which are morally unacceptable. This center and the others that follow it will offer those troops and their families’ new hope for recovery and new life.” 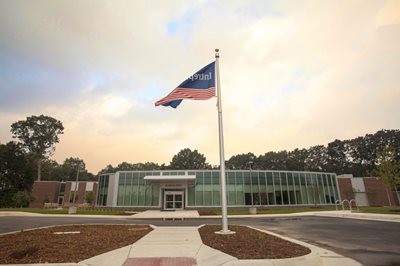 “This first NICoE Satellite Center at Fort Belvoir is yet another tool we have to assist service members struggling with PTS and TBI.” said Richard Santulli, Chairman of the Intrepid Fallen Heroes Fund. “It will allow us to help change the lives of thousands of returning service members and their families, all while keeping them close to home and the support system that is so vital to recovery. The invisible wounds of war have plagued our American heroes for far too long, and the Intrepid Fallen Heroes Fund is proud to play a role in making sure that every service member has access to the resources and care they need to fully recover.”

Each center will be 25,000 sq. ft. and cost $11 million to build. Upon completion, the Intrepid Spirit Centers will be gifted to the Department of Defense for their use in diagnosing and treating returning service members.

“We are honored and thrilled that the National Intrepid Center of Excellence is now an important part of Fort Belvoir’s fabric and mission,” said Col. Gregory D. Gadson, garrison commander. “The work NICoE does to diagnose and treat traumatic brain injury and post-traumatic stress is critical, and we’re excited to have it join in our partnership with all the facilities of Fort Belvoir’s medical campus. The opening of the NICoE at Fort Belvoir adds a dramatic new dimension to the care and rehabilitation our warriors deserve, and that they, their families and the nation expect.”

“The NICoE Satellite revolutionizes the care model for Traumatic Brain Injury and Post-Traumatic Stress through an innovative, inter-disciplinary care model for both the warrior and family,” said Dr. Heechin Chae, Director of the Fort Belvoir Intrepid Spirit Center. “Combined with our advanced research programs, this care model is fully integrated with our clinical programs to maximize the warrior’s functional ability and allows a productive return to military service/community.”

The design and mission of the Satellite Centers are based on the original NICoE, opened in 2010 at the Walter Reed National Military Medical Center in Bethesda, MD. Operated by the Department of Defense, NICoE is the most advanced facility of its kind in the country and is the center of the Armed Forces’ efforts in researching, diagnosing and treating TBI, PTS and related injuries sustained by military personnel. Hundreds of American Service Members have received some form of diagnosis or treatment from NICoE in the last three years.

• Sleep Lab: one sleep room, equipped with a sleep system and ambient therapy music, and a control room with a computer monitoring system.

• Central Park: a unique and multi-purpose environment to support physical therapy and family activities, with features including a therapeutic labyrinth for meditation and focusing exercises and a natural setting with trees, shrubs, and water elements.

• Family Room: providing a reprieve space for patients and family to spend time together and take a break from the clinical treatment regime.

Traumatic Brain Injury (TBI) occurs when a sudden trauma or head injury disrupts the function of the brain. Common causes of TBI include damage caused by explosive devices, falls and vehicle or motorcycle accidents. Most reported TBI among Operation Enduring Freedom and Operation Iraqi Freedom service members and veterans has been traced back to Improvised Explosive Devices, or IEDs, used extensively against Coalition Forces. Symptoms can appear immediately or weeks to months following the injury.

About Fort Belvoir Community Hospital
Fort Belvoir Community Hospital is a state-of-the-art, 120-bed facility and is one of the first military treatment facilities to use evidence-based design principles to better patient outcomes, decrease recovery times and to maximize provider and patient safety. Nature and its healing effects also play a large role in the hospital’s design and is a heavy theme throughout the facility’s five pavilions – Meadows, Sunrise, Oaks, Eagle and River.
The $1.03 billion, 1.3 million-square-foot hospital has a seven-story main structure, flanked on each side by two outpatient clinic areas that provide both primary and specialty care. In total, Fort Belvoir Community Hospital consists of five total buildings, 3500 parking spaces, 44 clinics, expanded pharmacy services, 430 exam rooms, 10 operating rooms, two DaVinci surgical systems, two linear accelerator cancer/oncology systems, and one of the military’s only dedicated substance abuse programs.