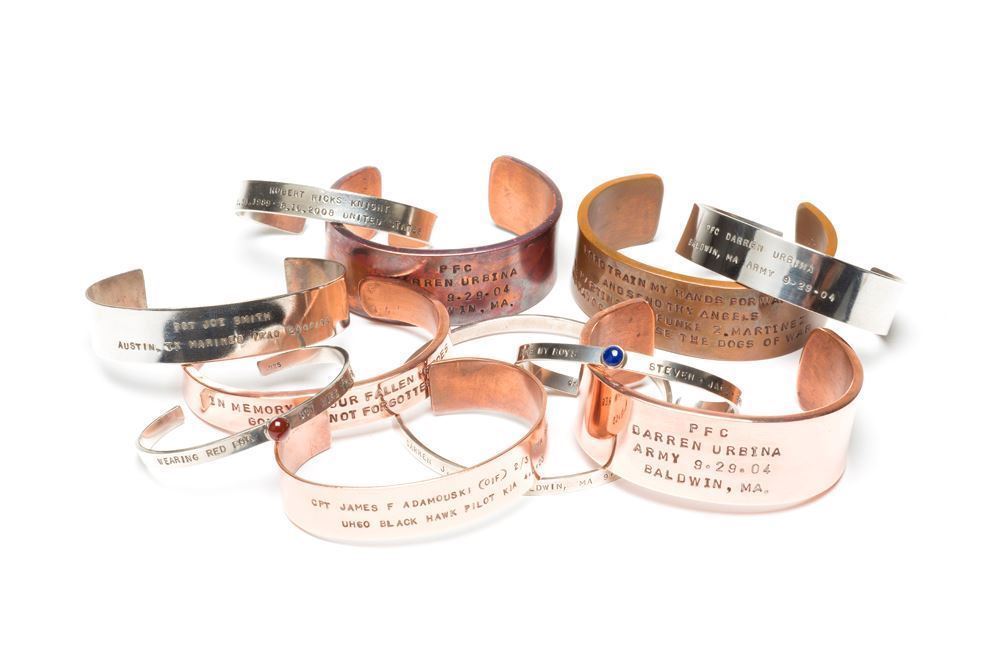 Chris and Loree Greta didn’t know the overwhelming support they would receive or the amazing stories they would hear when they started creating custom bracelets called HeroBracelets™ in 2004. Their goal was to support and give back to fallen military heroes and their families. And after a national news story shined a light on HeroBracelets, the Austin, Texas based company became an overnight success in its second week.

A HeroBracelet comes in many forms and is made from a specially designed four-sided, anodized aluminum. The pre-shaped, easily adjustable bracelets can be made in a number of colors, including black, bronze, purple, blue, red and pink. Each custom-made bracelet also bears the laser-engraved name of your hero. When you purchase and wear a HeroBracelet, you are honoring the hero whose name is etched into it. The bracelet serves as a reminder of the sacrifice made by a service member, first responder or loved one.

“We were overwhelmed with orders a majority of the first year of our business,” said co-founder Chris Gretta. “We sold as many as 1,600 a day, with our neighbors and friends helping stuff envelopes and answer mail.”

After more than a decade and shipping more than 200,000 bracelets worldwide, Chris and Loree say it’s still an honor to speak with service members and their families every day. The stories about their HeroBracelets are amazing, especially those from service members wearing a bracelet to honor a fallen friend.

“We see pictures of HeroBracelets that have been through multiple deployments that are so beaten up that you can hardly recognize the bracelets anymore,” said Chris. “But the owners would never give them up. That’s more powerful than any monument in Washington.

“Many families will order dozens of the Deployed HeroBracelets to honor someone who is actively serving. The families won’t take them off until he or she comes home safe.”

Two dollars from every bracelet purchased is donated to a non-profit organization, and the Intrepid Fallen Heroes Fund is honored to be the company’s primary charity. To date, HeroBracelets has donated more than $160,000 to IFHF. Chris and Loree said that HeroBracelets began donating to IFHF as soon as they learned about IFHF’s mission to support our nation’s wounded heroes.

“Anyone can do a simple thing to make a difference in people’s lives,” said Chris. “HeroBracelets has helped many people deal with the ultimate loss of a friend, family member or loved one. It’s helped them cope, honor and remember. There are few things in life that can mean more than that.”

Find out more about or order your own HeroBracelets on their website. While you’re there, you can also find many pages of hero stories from those who have a HeroBracelet of their own.