Football and the Military

This September, Virginia Tech paid its respects to our troops by participating in a military appreciation game against East Carolina University. If you missed the game, you can check out the highlights here. This year marks the second year in a row that VT has supported IFHF with their military appreciation game. In addition to raising awareness for IFHF, and military appreciation in general, the Hokies’ football team has donated funds from their auction of the specially designed jerseys and helmets from each game.

Not only is the Virginia Tech football team supporting IFHF, but so is head coach Frank Beamer. Beamer made a $20,000 donation to IFHF last year in accordance with last year’s military appreciation game. This year, the day before the game, the team and head coach visited the V.A. Medical Center in Salem. Both the players and veterans thoroughly enjoyed the visit, as it provided each a chance to say, “Thank you.” 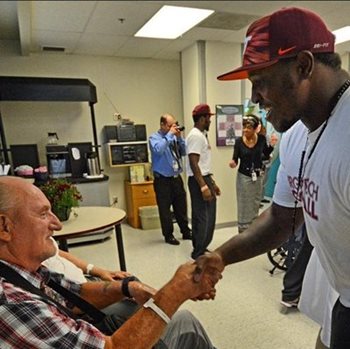 Virginia Tech’s continued support has brought a great amount of awareness and funds for IFHF. We could not be more proud of this partnership and thankful for their commitment to our cause.

Beyond Virginia Tech’s military appreciation games, there are many other parallels between football and the military. The biggest issue that stands to have a significant impact both is the advancements in head gear to prevent concussions and TBIs. As players get faster and stronger, they begin to hit harder. It became clear in the recent years that something needed to be done to better protect players from head injuries. Rules have now been changed and helmets have been reinforced to deliver more protection. Since then, head injuries have been reduced. Similarly, these advancements in impact safety help protect our service members in the dangerous situations they face everyday.

While a $20,000 donation might be a little steep any donation to IFHF furthers our mission to build our centers and treat our heroes. With the goal of building nine centers across the country, we know that many more service members will be able to seek the help they truly need. And with the help of committed partners like Virginia Tech, we are well on our way.