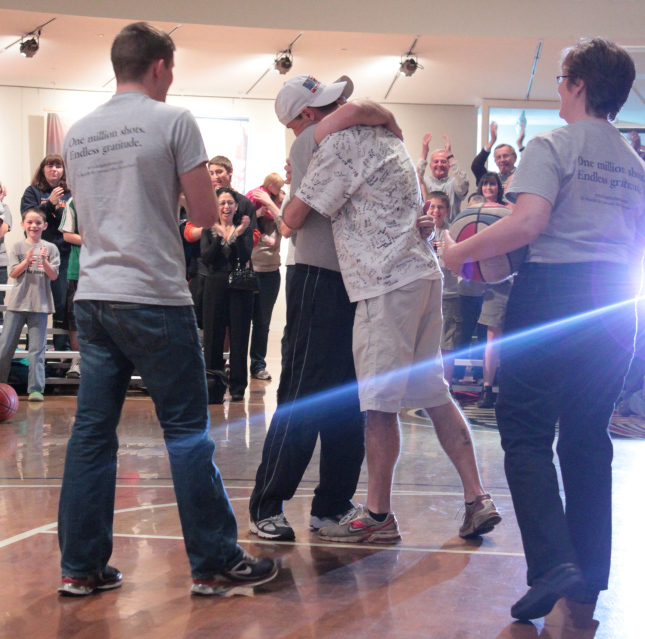 SPRINGFIELD, Mass. – Dave Cummings has completed the incredible feat of making one million free throws over a two-year span with a special event at the Naismith Memorial Basketball Hall of Fame on Veteran’s Day, November 11, 2011. Dave averaged over 1,300 free throws made each day since he started on Veteran’s Day in 2009. His efforts have raised both awareness and funds for the Intrepid Fallen Heroes Fund.

Dave’s final 1,000 baskets took place at Center Court of the Naismith Basketball Hall of Fame in Springfield, MA in a dramatic conclusion. Throughout his journey, he has included a number of reminders in his routine to honor members of the military. At No. 911 during each shooting session, Dave pauses to say a brief prayer and recall the unity the nation felt in the period following the September 11 terrorist attacks. He also keeps a pair of combat boots worn by Army Reservist Tom Cantara during a tour in Iraq, along with a pair of red, white and blue basketball sneakers, under the basket during each shooting session as a reminder of military sacrifice. The sneakers serve as a reminder of what our service men and women might otherwise be doing if they were not serving our country. The boots serve as a reminder of that they are doing instead.

“We’re grateful to Dave Cummings for his patriotism and sense of duty and dedication to our men and women in uniform,” said Dave Winters, President of the Intrepid Fallen Heroes Fund. “When he shot his 500,000th basket on the flight deck of the Intrepid Sea, Air and Space Museum on Veterans Day last year, we knew it wouldn’t be long before we were watching him sink his one millionth basket. We’re deeply honored by Dave’s efforts and thankful to the Basketball Hall of Fame for their support of our troops.”

Over the past two years, he has reached some incredible milestones:

“It’s not enough to go around saying ‘Happy Veterans Day’ and occasionally saying ‘thank you’ — I just wanted to do something more,” said Cummings.

The Naismith Memorial Basketball Hall of Fame pledged a portion of the Hall of Fame’s admission cost on Veteran’s Day, which was donated to Hoops For Heroes to benefit the Intrepid Fallen Heroes Fund.