Center for the Intrepid, haven for wounded troops, turns 10 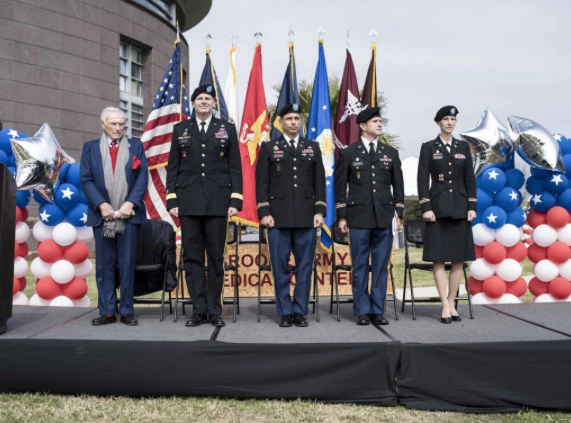 Shilo Harris was in the third of four Humvees south of Baghdad when a massive explosion ripped through the truck, killing three soldiers and enveloping him in flames. He was still conscious — somehow — as bullets flew in all directions.

Deafened by the blast, he couldn’t hear the ammunition going off.

“Nobody would tell me on the ground where my soldiers were,” said Harris, 42, of Adkins. “I finally asked the doctor as they were getting me cleaned up and cutting my clothes off and getting me prepped. … ‘Can you please tell me where my friends are?’ And he said, ‘You’ll find out in a couple of months.’”

That was about right. Harris awoke from a coma around 50 days later in San Antonio to learn that his three soldiers were dead. He soon learned just how fortunate he was. Not only did he survive despite burns over a third of his body, but he’d get back on his feet with the help of experts at a new, revolutionary medical complex: the Center for the Intrepid, which marked its 10th birthday Friday.

The center provides rehabilitative care for troops who’ve lost limbs or suffered severe burns, blindness or head injuries. A crowd of 500 who braved a chilly day for ceremonies was smaller than the 3,000 who watched its grand opening Jan. 29, 2007. Some were stunned that a decade had passed.

“That’s what everybody says,” the first CFI chaplain, former Capt. Roger Bryan van Pelt, told Harris. “How can this be? It’s been 10 years!”

In that way, the anniversary also was a reunion. Harris saw Van Pelt, now a middle school English teacher at Harlandale Alternative Center, and ran into Bobbie Henline, a GI also badly wounded in 2007 who launched a new career as a stand-up comic after his rehabilitation stint at CFI.

“I can only speak for myself. I love this country,” he said. “ I’ve been very lucky in this country, and this country has given me and my family a great deal. And so it’s time to pay back. I do this because I need to pay back for the privilege of being an American.”

CFI was badly needed when it opened a few weeks before Harris was brought to Fort Sam Houston to begin an arduous recovery that would last years. The lightning invasion of Iraq had long since morphed into a bitter counterinsurgency operation. In all, the war would leave 4,513 U.S. troops dead over the years and 32,203 wounded, according to the Iraq Coalition Casualty Count.

The signature weapon of the war was the improvised explosive device, or IED. Troops hit by buried roadside bombs often were badly burned and suffered amputations. Harris lost his ears, his left index finger and both pinkies. Henline suffered burns to a third of his body and lost part of his left arm.

More wounded streamed home as the war cooled off in Iraq and heated up in Afghanistan. Hundreds took advantage of devices such as a treadmill mounted on an 18-foot circular platform, projecting images onto a 360-degree screen to create the illusion of motion and help specialists adjust artificial limbs.

Fewer patients at CFI these days are recovering from war wounds. Marine Lt. Col. Brian Forney, who was on hand for Friday’s ceremony, lost his left arm and suffered burns when his CH-46 Sea Knight helicopter crashed in Thailand on a training mission nearly four years ago. He now commands Wounded Warrior Battalion East Detachment here and will retire this year.

“At the very core of the third floor is a gym,” said Forney, 41, of San Antonio. “It is a gym that’s got access to all of the prosthetics development and fabrication, it’s got access to the research. The occupational therapy, physical therapy is all in one place, which brings you to the people. The people that staff this place are absolutely phenomenal. It’s a great building, but it would be an empty shell without the people who work here.”

Fisher’s Intrepid Fallen Heroes Fund had been supporting the families of troops killed on duty since 1982, but it shifted its focus more than a decade ago after Congress increased life insurance for military families. The Army’s surgeon general at the time suggested the rehab center at Fort Sam. To help families stay close, a pair of 21-room Fisher Houses would be built.

But CFI was only the beginning. It was followed by the National Intrepid Center of Excellence in Bethesda, Maryland, for patients with traumatic brain injury and post-traumatic stress disorder. Five smaller Intrepid Spirit centers are up and running elsewhere, and two more are in the works.

The Intrepid Fallen Heroes Fund has raised more than $200 million.

“I could probably write a book … from the letters that I have received from families of soldiers and Marines and sailors that have come back,” said Fisher, 84, a former Army corporal who arrived in South Korea four days after the war ended in 1953. “I got a nine-page letter from a woman who thanked me for allowing their children to have their father back.”