FORT SAM HOUSTON, Texas – The world’s most technologically advanced rehabilitation center for amputees and burn victims was opened at Brooke Army Medical Center on January 29th, 2007, and patients and staff celebrated the anniversary with a ceremonial cake cutting on Friday, January 27th. 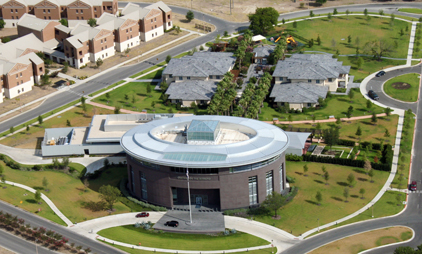 The Center for the Intrepid (CFI) is a four-story, 65,000 square foot facility built by donations from more than 600,000 Americans through the Intrepid Fallen Heroes Fund. It is now staffed and funded by Brooke Army Medical Center (BAMC) and stands adjacent to the San Antonio Military Medical Center.

Since its dedication in 2007, CFI has provided outpatient rehabilitation for more than 780 service members and averages more than 3,400 patient visits per month. The goal of the care is to maximize the potential of the injured servicemen and women whether they choose to remain on active duty or return to civilian life.

“The Intrepid is truly a national treasure, “said Maj. Gen. M. Ted Wong, BAMC Commander. “Not only do we see outstanding results for our patients through the synergistic effects of this facility joined with our great staff and the encouragement of fellow patients, but the facility itself stands as an icon that the American people fully support our men in women in uniform who have sacrificed for us all.”

Also on hand Friday was David Winters, President of the Intrepid Fallen Heroes Fund, which raised more than $50 million to build the Center and the two adjacent Fisher Houses.

“This center was not just the work of the Intrepid Fallen Heroes Fund and the leadership here at Fort Sam Houston and in Washington. The Center for the Intrepid was truly a gift from the American people,” Winters said. “Thousands upon thousands of our fellow citizens – mothers and fathers, children and grandparents, aunts, uncles and neighbors – all reached into their pockets to support our efforts and raise the funds needed to build and equip this beautiful building.”

The center also provides a wide variety of activities outside the clinical setting, including horseback riding, archery, golf and scuba diving. These outings help the patients recover basic motor functioning and reasoning abilities, build confidence and gradually encourages them to re-integrate back into the community.