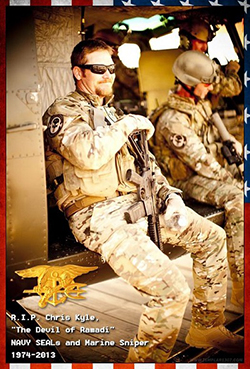 The Oscar-nominated movie American Sniper crushed box office records with the biggest January weekend opening ever. It brought in more than $90 million and carried with it some controversy. Based on the book “American Sniper: The Autobiography of the Most Lethal Sniper in U.S. Military History,” the film depicts the life of Chris Kyle, a Navy SEAL sniper who has been credited with having more than 160 official kills during his time in the service.

American Sniper is a devastating portrait of post-traumatic stress. In the movie, sharpshooter Kyle struggles to cope with war and its aftermath. Kyle is so talented that he acquires multiple nicknames, “Legend” amongst allies and “The Devil of Ramadi” amongst foes. All the while, Kyle evidently struggles to come to terms with the weight of what he’s doing, and as Kyle returns home, he has trouble getting back into the rhythm of life.

After his last tour, Kyle turns his efforts to assisting his fellow servicemen. He starts a program to assist service members wrestling with their psychological health and help them acclimate to society. On February 2, 2013, Kyle was shot and killed at a shooting range by Marine veteran, Eddie Ray Routh, whom Kyle had reportedly taken to the range in an effort to help him with post-traumatic stress.

Some service members turn to alcohol, drugs, anger, aggression, and reclusion as something to help them forget and lessen the burdens felt everyday. However, these types of coping mechanisms can be harmful for the individual and commonly leads to further depression. The worsening of these symptoms is what can lead to terrible consequences, as evidenced by Chris Kyle’s untimely death. The Intrepid Fallen Heroes Fund’s current initiative with the National Intrepid Center of Excellence is ultimately to provide a place to properly address these symptoms and begin treatment for these service men and women. Together, these consequences can be erased by offering support for psychological health (PH) and traumatic brain injuries (TBI).

With our current mission constructing state-of-the-art treatment centers for service members, specifically to treat TBIs and PH conditions, our goal is specifically aligned to those of Kyle’s. As a proven leader in supporting the men and women of our Armed Forces and their families, the Intrepid Fallen Heroes Fund will build 9 of these centers at military installations across the country. The invisible wounds are there, and it is our goal to help our heroes recover.

Your donations support the men and women of our Armed Forces and their families. A donation to the Intrepid Fallen Heroes Fund, no matter the size, goes directly towards building the centers. Each of these centers is named Intrepid Spirit and act as satellite centers to the National Intrepid Center of Excellence (NICoE). Furthermore, these centers are at the forefront of medical advancements and research to help treat these specific types of invisible wounds. Let’s honor our service members together and never forget their heroic efforts.